Spot features individual learning how the Republican proposal will increase their taxes in order to benefit the wealthy and well-connected.

As Senator Heller continues to jam his deeply unpopular tax scam through Congress, the Democratic Senatorial Campaign Committee is expanding its initial buy for the new ad “Mailbox,” highlighting how Heller’s bill will raise taxes on hardworking, middle-class Americans so that corporations and billionaires get a big tax break. The ad will target voters in Nevada as part of an expanded digital buy.

The spot features individuals learning how the Republican agenda will increase their taxes and make the middle class pay more in order to benefit the wealthy and well-connected – highlighting specific and popular tax deductions like state and local taxes, student loan interest, and medical expenses that will be eliminated.

From David Bergstein, Democratic Senatorial Campaign Committee Spokesman: “This weekend showed us that Senator Heller and his fellow Republicans will do almost anything to push through their tax scheme that hurts middle-class Americans in order to benefit their wealthy and corporate donors. Not only are they selling out hardworking Americans with their bill by making them pay more, but they’re lying to their constituents about the bill’s lasting effects. Poll after poll has shown that this bill is deeply unpopular with voters, and the DSCC is committed to ensuring voters know who is responsible when their taxes go up.” 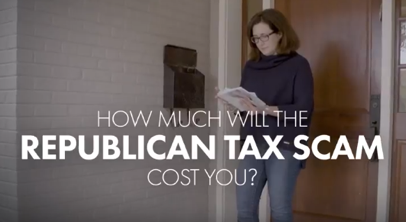 Individual #1 reading letter: Dear Ms. Young, we regret to inform you that your tax bill is going up.

Individual #2, reading letter: Dear Mr. Roth, you can no longer deduct your state and local taxes.

Individual #3, reading email: You can no longer deduct the interests on student loans.

Individual #4, reading letter: Your deduction for medical expenses has been eliminated.

Announcer: How much will the Republican tax scam cost you?

Happy Fourth of July! Voting is patriotic. Check your registration, and help get your friends and family registere… https://t.co/gCRkwj311Q